In the early 1850s, shortly before the apparitions, Lourdes was a modest district town with a population of 4,135; a passageway for travelers on their way to the surrounding spa towns.

Marie Bernarde Soubirous (Bernadette) was born on January 7 of 1844. Her family lived a very simple life working at Boly Mill, East of the town, for decades. Her parents endured several financial hardships due to competition from new steam-powered technology and to illness and death in the family.

Unable to pay rent, her parents were forced to leave Boly Mill. Bernadette was 10 year old. Their life of poverty continued to worsen and, three years later, they had to move into the Cachot, the punishment cell of a disused prison; a filthy hole that a cousin lent them out of kindness.

In order to help her family make ends meet Bernadette looked after her siblings while her parents worked. She also collected wood and scrap iron to sell in the market and helped in her aunt’s tavern.

A few months into living in the Cachot life for the Soubirous family was made even more difficult. Bernadette’s father, François Soubirous, was accused of stealing from the bakery. He was arrested, imprisoned and then released a week later due to lack of evidence. Reduced from master-miller to day laborer, Bernadette’s father sent her to work as a farm-girl in the nearby village of Bartrès in the care of family friend Marie Lagües as to make “one less mouth to feed”. 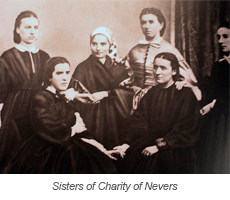 On the farm Bernadette minded the sheep and did the household chores during the day. In the evening Marie Lagües tried to teach her the catechism. Bernadette, who spoke only the local dialect, simply could not remember the answers she had to make in French. More often than not these lessons ended in shouting and tears.

Less than a year at the farm, Bernadette convinced her father to return to Lourdes. On January 21 of 1858 she began attending the paupers’ class at the hospice run by the Sisters of Charity of Nevers.